The Scott/Garrison Duo, a 2016 prizewinner for The American Prize, is a dynamic and active chamber group located in Moscow, ID featuring Shannon Scott, Associate Professor of clarinet at Washington State University, and Leonard Garrison, University Distinguished Professor of flute at the University of Idaho. The Duo has collaborated with pianists Jay and Sandy Mauchley, Roger McVey, Roger Price, Melissa Loehnig Simons, Catherine Venable, Rajung Yang, and others. Albany Records released their critically acclaimed CDs, Rough Wind/Smooth Wind, Chimera, Perennials, and Barn Dances. They have performed at conferences of the College Music Society, National Flute Association, and National Association of Wind and Percussion Instructors, and the Hawaii International Conference on Arts & Humanities. The Duo has also played at universities in Arkansas, Idaho, Michigan, Missouri, Ohio, Oklahoma, Texas, and Washington, the Camerata Musica series in Richland, WA, the Second Sunday Sounds @ 6 series in McCall, ID, and as part of the Walla Walla Symphony’s “Heart Beat” program and Saturday Soirée Chamber Series. As members of the Flute/Clarinet Duos Commissioning Consortium, they have commissioned works by Derek Bermel, Valerie Coleman, Pierre Jalbert, Libby Larsen, and Roger Zare.

The Scott/Garrison Duo began performing in recitals at Northwestern University in 1988. They joined the Tulsa Philharmonic as full-time musicians in 1988 and 1989 respectively. As faculty members at the University of Tulsa, they performed frequently in the university’s recital series. The Scott/Garrison Duo has been featured in the Brown Baggit Series at the Tulsa Performing Arts Center, the “Music Sandwiched In” Series at the Tulsa Central Library, “Tuesdays at Trinity” at Tulsa’s Trinity Episcopal Church, the Evenings at the Bernsen series at the First Presbyterian Church of Tulsa, and the Stroud Chamber Music Series. The Concertime Series in Tulsa presented the Scott/Garrison Duo in March 1998. In his review, James Watts of The Tulsa World called their program “refreshing” and the Duo “extremely talented.”

As part of their affiliation with the Tulsa Philharmonic in 1989-2002, the Scott/Garrison Duo introduced the flute and clarinet family to countless elementary school children and residents of many area retirement homes throughout the Tulsa area. In addition, the duo performed recitals for the Arts and Healing Program at Hillcrest Medical Center, in branch libraries, and at the Philbrook Museum. 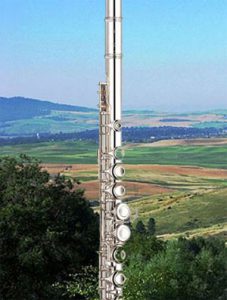